Skip to content
Hilarey.com > Blog > Miscellaneous > Who are the “other” sheep? 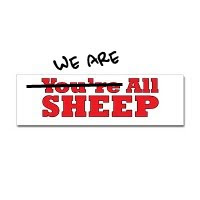 God often uses the analogy of a shepherd and sheep in the Bible. Followers of Him are called ‘sheep.’ To an outsider this sounds insulting, but whenever I need a little comfort, it is a wonderful image to picture an all powerful God standing near, ready to slay lions and wolves.

The first time I saw this bumper sticker, I thought, Yep. We are all pawns in this game. Some sheep just don’t have a Shepard.

David says in Psalms 23 the Lord is my shepherd. In the New Testament, Jesus says he is the Good Shepherd because he lays down his life for his sheep. (John 10:11)

Jesus prophesies in John 10:16, “And other sheep I have, which are not of this fold: them also I must bring,” He promised “they shall hear my voice; and there shall be one fold, and one shepherd.” Only one flock gathered together with his chosen people Israel, under one Good Shepherd, Christ.

This is the reason for this post. A passionate LDS woman once told me, with tears in her eyes, that this prophecy in John 10:16 was about the Mormon people and it proved the whole religion.

So what is this about two flocks? I did a little research:

Hang on to that for a second. God first came to the Jews, through Abraham. Similarly, In Matthew 10:5-6, Christ first sent out his disciples to first preach to the lost sheep of Israel. The gospel went to the Jews first.

The Jews had relied on the fact that they were God’s chosen people and missed the point that God wanted a relationship with them. John the Baptist speaks of this when he said in Matthew 3:9 “And think not to say within yourselves, We have Abraham as our father: for I say unto you, that God is able of these stones to raise up children unto Abraham.” This is a warning. I laugh thinking, God could give his promise to rocks if he wanted.

Jesus said to the Jews in Matthew 21:43 “Therefore say I unto you, The kingdom of God shall be taken from you, and given to a nation bringing forth the fruits thereof.”

Paul also speaks in Romans 10:19 about God’s words “I will make you angry by a nation that has no understanding.” It made a way for non-Jews (Gentiles) to know God even though they had no understanding of the law, there were foolish. Even more than know God, Gentiles were then able to enter into a relationship with God.

Romans 1:12-16 tells us that because the Jews stumbled* it resulted in riches for the Gentiles. We receive those riches through the Good News of Christ. It is the power of God producing salvation – first for the Jew and then for the rest of us.

If we accept the good news (gospel) of Christ then–we who were formerly far off from God can be brought near by the blood of Christ. When we were excluded from the promise, foreigners, Christ destroyed the dividing wall. Ephesians 2:11-15

This mystery is that through the gospel “the Gentiles should be fellow heirs, and of the same body, and partakers of his promise in Christ by the gospel” Ephesians 3:6

Our ability to become children of Abraham through adoption in NO WAY detracts from the original covenant between God and his chosen people Israel. They are still the chosen people. Because even a contract between men is not changed after the agreement, even more so, will God not go back on his word or change his promise. Galatians 3:15-17 and Romans 11:11

The other sheep then, are simply Gentiles who accept Christ. We had no understanding of the law (because it was originally given to the Jews) and we were not a people. Gentiles are not a nation. Gentiles are in every nation. Yet once we believe in Christ we are gathered into one body regardless of our nationality. 1 Peter 2:4-10. Verse10 “Which in time past were not a people, but are now the people of God: which had not obtained mercy, but now have obtained mercy.”