Skip to content
Hilarey.com > Miscellaneous > What grade are you in?

Last night my we went to a ceremony at my son’s school where he was admitted into the National Honor Society.

After saying the pledge and signing a book, his principal came over to say hello. He asked my other kids where they went to school. When they answered “homeschool,” he remembered my oldest was also taught at home before he entered highschool.

He promptly assured me “He (the one who just received the honor) is doing fine.” As though I would be concerned how my homeschool student would assimilate. I wanted to say that it never occurred to me that he wouldn’t…fortunately I just smiled.

He wasn’t being rude. In the ten years we’ve taught at home, I’ve learned there is a legitimate concern. Because of this, I do poke fun at ourselves once in awhile. I am not going to get into reasons for homeschool versus public or private school, there are benefits and sacrifices intertwined with each option.

When the simple conversational “What grade are you in?” comes: teach your child to know where they would fit 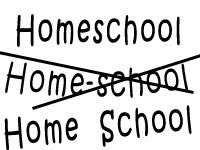 according to their age. It is really just a generic way for an adult to converse with a child and ask them how old they are. Just like when we ask “How are you?” and we don’t really want to know.

My kids and I joke that the typical homeschool answer is, “In what subject?” The problem with this is that even though your 11 year old does 8th grade math, if you tell everyone he is in 8th grade, they will assume his maturity is at the same level. And it isn’t.

Once in awhile a really young kid will show up in my kids’ youth groups. A kid who should be in 5th or 6th grade, age-wise, but is ahead in a subject or two. Or maybe the kid just doesn’t “get” the immaturity of the other kids their age. So the parents think he’ll be more comfortable with older kids. But the older kids notice the difference, and this adds to the homeschool stigma.

It especially reflects badly on homeschoolers if the child is not at 8th grade level in all their subjects. If your student goes fast because they can–great. Teach them to say they are a 6th grader who is ahead, in math.