A little while ago I finished the Book Do Hard Things. As a family we have chosen a hard thing: to run 4 half marathons in 5 weeks. 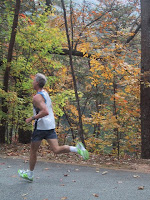 The goal is Run 4 Heaven’s Gate, to support our church’s foreign missions in India. None of us are runners, so this is especially ambitious. I was reluctant to mention our goal before–because I hate failing. Even worse, to publicly fail. Maybe that was just an excuse to not give it my best try.

We have entered our third week of training and while none of us can run a full three miles without stopping, we are getting closer. I twisted my ankle during the second week and had to take it easy, I seem to be recovered now and can start pressing forward.

I am told there is a ‘runner’s high,’ but I haven’t experienced it. In fact, I remember as a kid my dad pointing out the window and commenting “That’s why I never wanted to run, I’ve never seen a runner smile, they all look like it is the pits!”

So right now I just focus on putting one foot in front of the other without scowling.