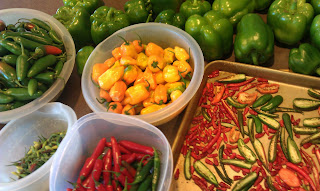 My husband has developed a taste for spice that few peppers can temper.

We had a whole garden bed devoted to the fiery little bits. This is a small portion of our harvest,  in the back you can see the bell peppers…second class citizens.

We’ve dried and pickled serenos, jalapenos, Thai chilies, Tabasco “super chilies” and habeneros . And made dozens of jars of something we’ve named “Hab-Sauce.” I also tried a batch of Habenero Gold this year–it was a new project from my favorite canning book. 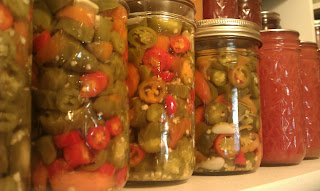 Habenero Gold is a glorified adaption of jalapeno jelly, which you can eat with tortilla strips and cream cheese or brie. Last year I just substituted jalapenos with habeneros and it was such a hit that this year I decided to try the recipe that showed dainty bits of golden apricot and red bell pepper suspended in the spicy jelly.

But my husband was not pleased I used even a handful of his habeneros on an experiment. It actually turned into a “discussion.”

He said I could make it but he wouldn’t eat any. And I lamented to my daughter that I wanted him to both eat it and like it. She was a little disturbed that she understood me. Her comment was that if a man made some jelly and another man said (use a donkey voice from Shrek) “No, I don’t want no jelly.” The first guy would say “Cool.”

Girls, help me out here. Who else has a neurotic drive for sharing, community and an intimate society? Is it only women?